How About Spending the Night at L'uni Theatre? 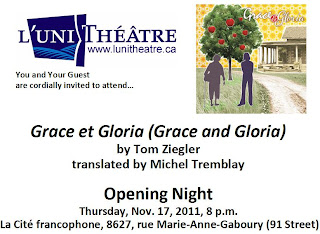 L'Uni Théâtre has kindly donated two ticket to the opening night performance of Grace and Gloria.

DO YOU WANT THEM?

Email MCRP(at)Edmonton(dot)ca with L'Uni s'il vous plaîs! in the subject line, and they may be yours. We will put all the replies into a hat and draw the lucky winner on Monday.

You can send us one email per day!

Two women clash and find comfort at pivotal points in their lives in the heartwarming drama Grace et Gloria (Grace and Gloria) by Tom Ziegler, translated by Michel Tremblay. This collision of down-home values and contemporary norms between two women seeking balance in their lives launches L'UniThéâtre’s 19th season and runs Nov 17-20 and Nov. 24-27 at La Cité francophone (8627-91st St.).

With glowing accolades, such as the New York Times review declaring the show a “sentimental odd-couple crowd pleaser,” and the Toronto Star’s assessment as “a wry take on that well-worn battle between common sense and education,” Grace et Gloria is a bittersweet drama that aims to take comfort in unusual circumstances. Grace has just been released from hospital, sent home to die of cancer while real estate developers bulldoze her property. Gloria is a Harvard-educated business- woman whose participation in the New York rat race was sidelined due to her son’s death and finds herself as Grace’s caregiver. Given their different backgrounds, the two find solace in sorting through their emotional baggage, tackling such issues as religion, child-rearing, death and ultimately, love.