With winter well on its way, and our outdoor compost heap nearly frozen through already, we decided to give our worms a bit more attention. Winter composting outdoors is slow, and while we'll probably still toss quite a bit of kitchen scraps on the pile over the winter, I really want to shift into using indoor compost methods. And that means getting our worms working a bit harder.

Of course, we could hardly expect them to increase their workload under their current living conditions. Nope, these guys need a new home, and I need an easier way to harvest their precious poop. (Ahem. Excrement ) It also needed to be something I could complete in less than an hour.

The One-Way Worm Elevator is born!

The idea is that by stacking containers, one with food, one without, the worms will migrate to the bucket with food in it, and away from the finished compost.

To be fair, I got this idea from a friend, who used much bigger containers, and made three layers, which I'll explain later. Hers is a Luxury Condo for worms. Here's how we made our mid-range version:

1. First, gather all your tools and supplies: 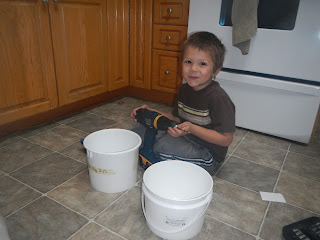 Two nesting buckets, a drill, drill bit and a Lovely Assistant. (Hey, you didn't expect me to operate a drill AND take pictures, did you?)

2. Stack your buckets and start drilling holes in the bottom of the top bucket: 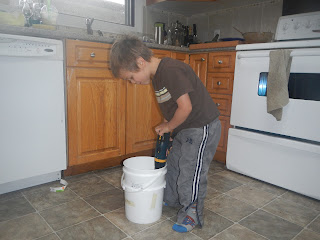 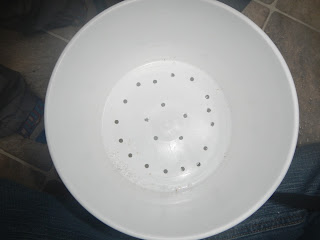 3. Make some nice worm bedding for the bottom bucket.

Here, we're ripping up newsprint for “browns,” we also threw in a sprinkle of sand, a handful of garden dirt, and some vegetable peels: 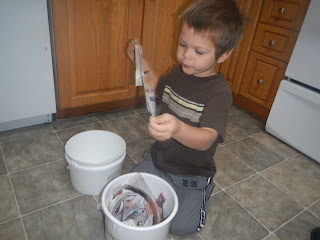 4. Get out your hungry worms.

I had stopped feeding them a week earlier, hoping to finish off the compost. As you can see there are still plenty of big chunks left, meaning plenty to eat. Regardless, we plowed on with the plan, hopeful.

5. Stack the buckets (the one with holes on TOP!) and dump in your worms: 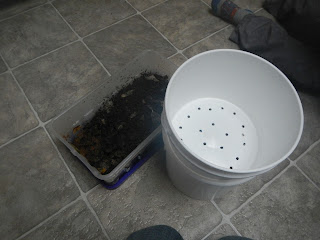 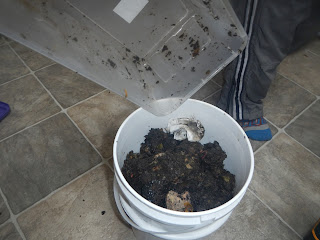 We also drilled holes in the lid, of course, so the worms and compost can both breathe. Making sure enough air can circulate is very important, especially for keeping away smells.

In time, the worms will migrate to the bottom bucket, leaving the top one empty of critters. When this happens, the top bucket (finished compost) can be removed and used for compost teas, as fertilizer or mulch for houseplants, lawn conditioner, anywhere you want nutrients in the soil.

After emptying the top bucket, we will take the bottom layer and move it to the top. Holes on top and bottom provide great circulation and the empty bottom bucket can catch any excess moisture drips.

When it looks almost done, we stop feeding the top and bait the bottom bucket, starting over again. This should allow me to continuously add food waste to the worms, and still make harvesting easy-peasy.
A friend of ours has made a three tier tower, with a second bucket with holes. Same idea, rotating fresh and almost-done compost between the top two, but with improved air flow in the middle layer and a bottom bucket to catch excess moisture (which, by the way is an amazing liquid fertilizer).

We did not, however, put on a lid.

Now, remember, the whole point of this craft is to allow the worms to migrate, so that no one has to pick through the finished compost and harvesting becomes easy and guilt-free.

My Lovely Assistant, however, seems to believe our worms need a head start on migration. It started out innocently enough, picking out a few big ones... 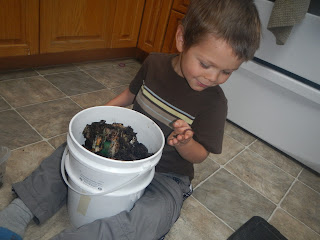 But quickly turned into a more serious matter. 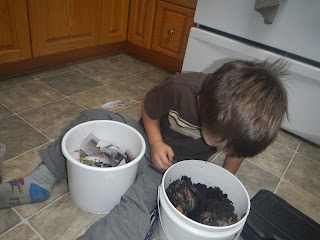 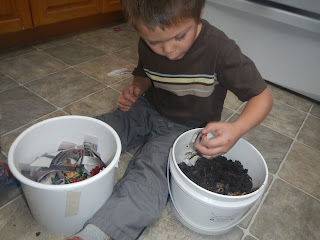 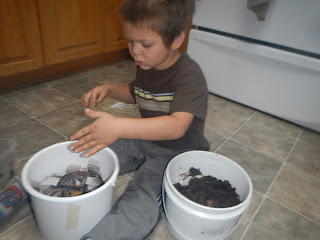 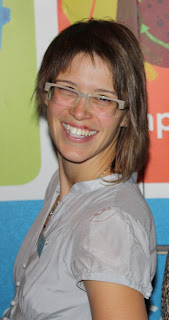 Megan Miller is a 2012 grad of the MCR Course. Megan is very interested in re-skilling for sustainability and a large part of that is growing, harvesting and processing her own food. She has also been learning other living skills including leather crafting for clothing, soap making, and sustainable building. Megan and her family have been experimenting with composting for four years.
Email ThisBlogThis!Share to TwitterShare to FacebookShare to Pinterest
Labels compost, diy, Master Composter Recycler (MCR), MCR blog post, vermicompost, Volunteer