Composting at The Sunshine Community Garden

MCRs are "community leaders in waste reduction." Here is Jocelyn C's report about setting up a compost system at her community garden -- along with students from a local junior high school! 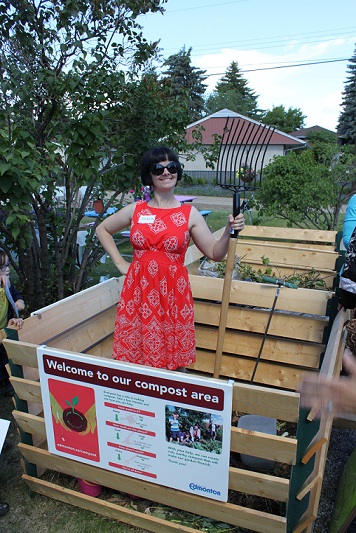 "Although I was not yet an MCR in 2014, I was already a composting devotee so I took on the task of planning our community garden’s composting system. The Sunshine Garden (or Fulton Place community garden) was designed in 2014 and built in May 2015.

To get ideas for placement and design, I first called the City of Edmonton’s compost hotline and asked Mark Stumpf-Allen to come to a garden meeting in May 2014 to answer our community garden composting questions. In July 2014, I also took part in the Sustainable Food Edmonton community garden bike tour, which really helped me get an idea of the different approaches these gardens took to collecting and harvesting compost.

During the tour, I was especially impressed by the composting system from the Rio Terrace Community Garden, so we went ahead and copied its 3-bin design by buying these brackets from Lee Valley. Using Mark’s advice, we placed the composting system in an area sheltered by two lilac trees, and placed signage along the bin that has the most active pile to protect it from drying.

We installed the compost bins in May 2015 during a work bee that we had organized with the nearby junior high school – 90 grade 8 & 9 students from Hardisty School came to the garden site to help build the garden. Every screw that holds our composter together was drilled by a junior high student! The students were really keen to learn about composting and asked many great questions. 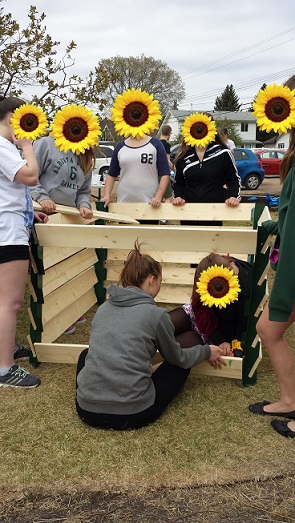 Now that our first garden season is coming to an end, we have been thrilled by the amount of nearly finished compost we have already produced (half of a cubic yard)! Our three-bin system is working well for us. We have the gardeners input their clippings into one bin, which are mixed with browns to prevent smells and to balance the composting reaction. The middle bin is where the nearly finished compost can cure without a continual input of greens. The finished compost ends up in the third bin, so the gardeners can add it to their garden plots as needed. We turned the bins over in August, and will do it again in the spring."

How does your community garden compost?
What are the successes and challenges?