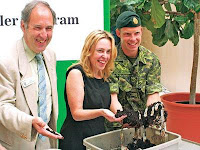 Councillors Ben Henderson and Kim Krushell get their hands full of compost with Maj. Sean Ward, a graduate of the city’s Master Composter Recycler program, which celebrated its 20th anniversary yesterday.Once Maj. Sean Ward graduated from the city’s Master Composter Recycler program, it didn’t take long for his skills to be put to use. Ward brought his composting expertise to war-torn communities outside the Kandahar Airfield in Afghanistan, along with cutting down on landfill waste at the base. The soldier would keep the coffee grounds from Tim Hortons and food waste from the kitchen at the base before turning the garbage into compost that could be used for local gardening. “It was successful enough where I had three truckloads, and it allowed me to take my message to the local Afghans,” said Ward. “The other soldiers thought I was a bit strange, a little wacko. But as they played Nintendo, I was out there turning my heap.” Ward was among 661 graduates of the program celebrating its 20th anniversary at city hall yesterday. The city says the grads have spent 35,000 hours of their time educating people on green waste management practices. For more information on the program, check out www.edmonton.ca/waste

Maj. Sean Ward knew a lot about composting before he went to Afghanistan, and he came back with an even greater appreciation of its possibilities.
Afghans, he learned, use human waste as manure. Now, Ward has a composting toilet in his garage. He said his neighbours have never complained.
Ward is one of 661 volunteers in the City of Edmonton's Master Composter Recycler program.
On Wednesday, Edmonton hosted an event at City Hall to commemorate the 20th anniversary of the program.
Volunteers must complete a three-week course, in which they learn about waste-reduction practices, including composting methods, recycling and hazardous waste management.
Ward's interest in composting started with his aversion to a backyard chore.
"Initially, I just used to hate bagging my grass (clippings)," said Ward.
When he moved in Edmonton from Ottawa in 2008, he found the program online and joined. Once volunteers finish the course, they are asked to commit 35 hours to educating others about recycling and waste reduction.
Ward introduced composting to the Military Resource Centre's daycare at Canadian Forces Base Edmonton and his unit. When he was deployed to the Kandahar Airfield in Afghanistan, he continued to compost to take his mind off work, using waste from the dining hall and the local Tim Hortons.
"I find composting very cathartic," said Ward. After collecting three truckloads of compost, Ward decided to work with the provincial reconstruction team in Kandahar city to set up composting with Afghan district leaders.
But when he showed them a sample of the compost, the district leaders wanted to use it to feed their livestock. That's what they do with all their organic waste. They told Ward nothing gets wasted.
"I felt like the rich, spoiled Canadian," said Ward.
He then worked with the district leaders to develop a safe way to compost human waste, what is usually used as manure for fields in the area, said Ward.
"That's how nature designed it ... from the beginning," said Ward.
Mildred Thill was in the first class ever offered by the volunteer program and received a plaque at Wednesday's event. Thill's composting career, however, started in Toronto, while her husband was studying at the University of Toronto in the 1980s. She started a recycling program in the building she was living in, making it one of the first apartment-style recycling programs in Toronto.
Her property manager wasn't on board with the idea at first, said Thill, but she was persistent.
"I don't know what it is about Alberta, but we just don't take no for an answer," said Thill.
Sonya Hinds, Lindsay McWhirter and Mary Hicks are graduates of the 2003 class, and found each other at the event.
While 661 students have graduated from the program, around 250 are active at any given time, said Connie Boyce of the city's waste management branch. In November, the city is offering a refresher, which will include suggestions on how to approach a neighbour who puts out 20 bags of garbage, said Boyce.
jcummins@thejournal.canwest.com
Email ThisBlogThis!Share to TwitterShare to FacebookShare to Pinterest
Labels compost, fun