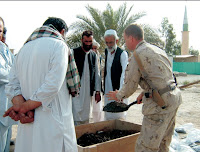 As a member of the City of Edmonton Master Composter Recycler program, I endeavoured during my recent seven month deployment to Afghanistan to tap into Kandahar Airfield’s (KAF) massive amount of food waste generated by the 20,000 multinational troops stationed there. My intent was to demonstrate the feasibly of composting in Afghanistan and to highlight its usefulness to the local population.

While preparing the first compost pile, there was concern from preventative medicine officials that the Food Web of an Afghan compost pile may contain or attract more d 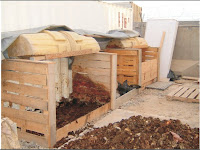 angerous critters than the typical Canadian heap. Specifically, would the highly poisoness and aggressive scorpion and insidious camel spider be a part of the predatory ecosystem to replace our more benign pseudoscoprion and our friendly Canadian garden spider? Would there be any disease vectoring mites or different bacteria present in the pile that could be harmful? In Afghanistan attracting mice is always a major concern because where there are mice there will be deadly saw scale viper snakes waiting to have a meal. Would the same Canadian composting principles of regular turning and adequate moisture be successful in warding off these creatures? Would composting in Afghanistan be a viable waste management activity? Under the watchful eye of many doubtful officials, I was permitted to forge ahead with a modest three-bin system. 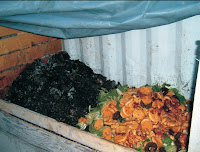 Delightfully, I found that the basic tenants of composting worked extremely well in Afghanistan. Through the cooperation of Canada’s KAF Tim Hortons and one of the Camp’s major kitchens, volumes of donuts, coffee grinds and vegetable matter were successfully composted and diverted from the Camp’s incinerator. As well, some captured Talaban bomb making materiel, ammonium nitrate, was mixed with shredded paper to compliment the heap’s nitrogen to carbon ratio. In essence the materials of war were converted to enrich the country’s soil.


Furthermore, the smell and sight of the compost pile’s ecosystem throughout its many stages were the same as what one would expect in Canada – lots of ground beetles, millipedes, sow bugs, mites and the familiar lovely aroma of actinomycetes. Fortunately, scorpions and attacking spiders were not a problem, however, preventing flies was a major challenge. Flies in Afghanistan, despite the lack of water and vegetation can be incessant. Where they came from I have know idea! However, with an open and exposed pile they multiplied by the thousands. Their population was controlled through regular turning and by covering the pile with plastic to make it difficult for them to lay their larva.

With about three yards of finished compost and with the cooperation of the Canadian Provincial Reconstruction Team, I held a “how to composting seminar with officials from the Afghan Department of 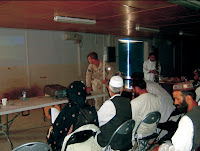 Agriculture, Kandahar City Waste Management and several District leaders. Interestingly, the average home in Kandahar has next to no vegetable waste. All food scraps are fed to the family livestock for food so household waste is not an issue like it is in Canada. Instead, the seminar was tailored to focus on the more challenging task of safely composting human manure. This is a waste resource that many rural families are discarding or unsafely applying directly to their fields. Challenging as it is was conveying the principles of composting through a translator, all of the participants left the seminar bolstered with the concepts of turning their waste into a resource through composting.

Delightfully, the success of the small three bin KAF composter proved that composting in Afghanistan and KAF is a safe and viable waste management activity for the local Afghans and 20,000 KAF soldiers. As a result, KAF environmental engineers are now investigating larger scale composting concepts for KAF and local village leaders are conveying the concepts to help their people.