Share a gritty world view of Waste's Impact on Society 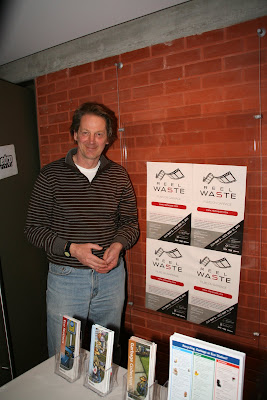 Our garbage says a lot about us as individuals and as a society.

A large number of Edmontonians recently got a taste for how different societies treat their waste via a number of award-winning films from around the world that were screened at the Metro Cinema.

The films were part of the 2nd installment of the REEL Waste film festival, a feature of the tri-annual Waste - the Social Context conference which ran from May 8 - 11th and offered a unique opportunity for delegates from around the world to meet and present research contributing to innovative solutions in sustainable waste
management.

“There was a really good variety for everybody in terms of tone and subject matter," states Branch education programs co-ordinator Garry Spotowski (class of 1992, at left) who coordinated the film festival which explored the funny, chilling, and sometimes poignant, sides of waste.

“I have no doubt that everyone who attended REEL Waste now has a new view on waste and our throw away culture.”

As a special treat, volunteers interested in holding their own Film Fest can attend the monthly update training night August 25, which will focus entirely on hosting a movie night, and Patty will share her secret recipe for Perfect Popcorn and Twizzler combinations.
Email ThisBlogThis!Share to TwitterShare to FacebookShare to Pinterest
Labels fun, opportunities