Update Tour of the IPTF and Co-Composting Facility

Last week, a group of the Public Education staff at the Waste Management Branch went for an 'update tour' of the IPTF and the Co-Composting Facility. Lots of changes to the intake of waste in the last few weeks! We each needed steel toe boots, a safety vest, hard hat, face mask and protective eyewear because we were heading into the belly of these two facilities, and geez- it's extremely automated! Below, Jim (Composting Facility Operations Technologist), Neil (Program Specialist at EWMC), Brant (Education Officer at EWMC) all geared up. 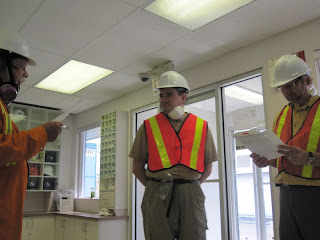 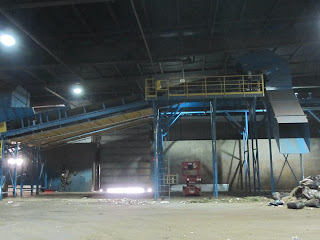 Standing under those conveyor belts, I took this shot of the old tip floor. No longer used as the main drop off site for garbage trucks, but rather material is sent here from the IPTF Pre-Processing area. Notice on the left of this picture, the two conveyor belts and making piles of materials from the Pre-Processing. 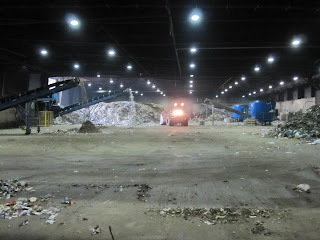 One conveyor belt was transporting material which was screened to 5 inches, which is mostly landfill material. 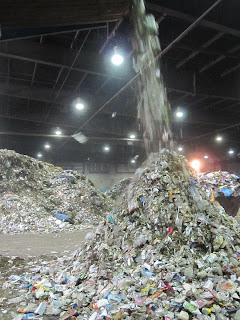 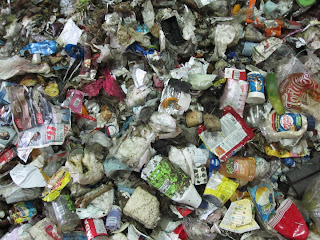 The other conveyor belt had stuff screened to 2 inches, which will mostly continue on into the Co-Composting Facility. 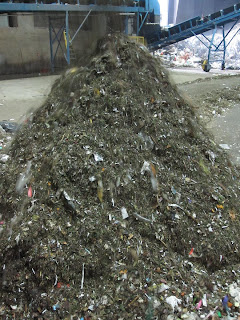 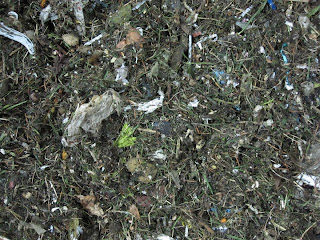 Following the path of this screened material, we walked INSIDE of one of the mixing drums. This one has been shut down permanently (hence the conveyor belt inside of it). I never thought I'd be in one of the drums! 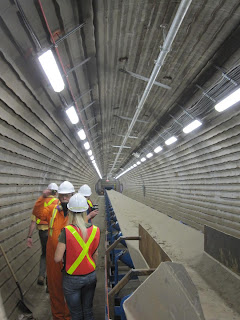 Same process from here in the Composter. But I was happy to walk up, waaayyy up to the trommel screens. They're out of use right now since the screening is mostly being done in the IPTF. It is so insanely humid at the top of that ramp, phew! Jim said 95% humidity and I believe it. So hot! (I was adjusted to the stink by this time.) 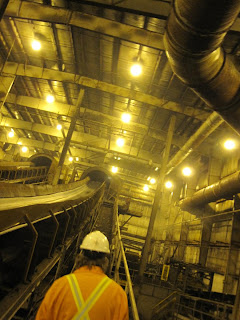 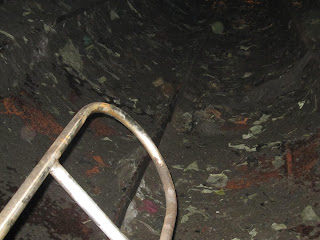 Ok over to the IPTF. Here's where the garbage trucks are unloading residential waste and multi-family waste. No more guys with hockey sticks poking around in the bags (unfortunately... you'll see why that's a problem later). The grappler and front end loader are pushing the material to a hole at the right side of this pic which puts stuff onto a slow conveyor belt to go into the Pre-Processing. 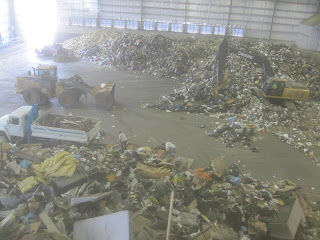 Material goes to the Pre-Processing, which just started up in the beginning of May. When on a tour, you will just see from the skywalk that the Pre-Processing area has lots of conveyor belts, some trommel screens and disc screens, but most surprising to me was that there are workers in a little room hand-sorting some of the garbage! The picture below is inside the room where these workers are. Much like the MRF, they are pulling certain things off the line to either go to the Composting Facility (eg. large bags of grass or leaves), things that go for recycling (eg. large pieces of metal, appliances, etc), and of course things that they don't want to go any further in the IPTF because they will clog up the system (eg. extension cords, bicycles, propane tanks, etc). 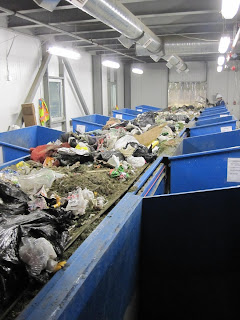 Here are two items that were taken off the line during Pre-Processing. Back in the days when there were workers on the tip floor sorting through things a bit more carefully, this stuff would have been pulled aside and landfilled. In the IPTF, the grappler is not able to notice a bike so it continues on into the sorting. Unfortunately, these two items jammed the entire facility for hours when they got stuck in the screening stage. 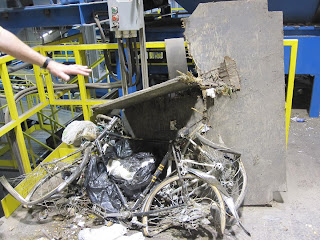 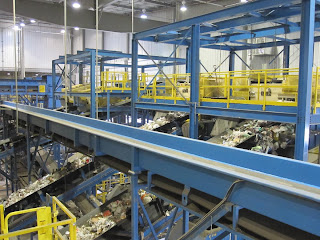 A new kind of screen called the disc screens do similar work to the trommel screens. Small stuff falls below and big stuff bounces over the discs to go on a separate route. Jamming is extremely common in the disc screens because of long stuff, such as VHS tape, extension cords, rope, panty hose, and so on. The whole facility stops when this disc screen is jammed. These workers jumped in to try to unjam it. 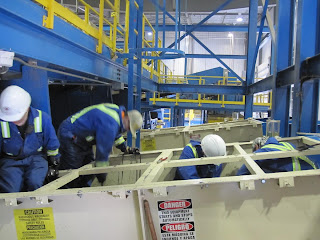 Yup, it's good and stuck. More reason we need to focus education on bringing extension cords, VHS tape and such to the Eco Station. It really clogs up our garbage processing. 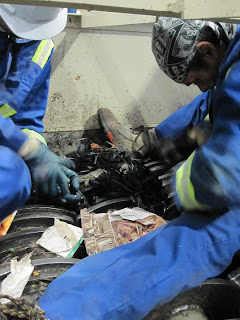 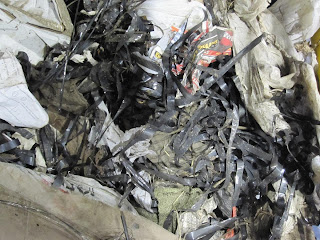 Moving along, the material that is not compostable and not recyclable is moved to the trucks for the landfill. In a few years, these conveyor belts will re-route the landfill stuff to another area of the IPTF to shred up the material in preparation for the Biofuels facility. That will be an exciting day, and will definitely require another tour! 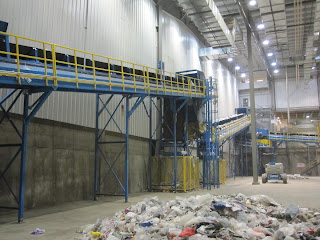