Composting Systems at some Community Gardens

On Saturday August 21, 2010, I led a group of gardeners and enthusiasts on a tour of 7 community gardens in central Edmonton by bicycle. It still a bit smoky outside, but we pedaled our way around downtown and Strathcona. You can take a peek at our cycling route (with garden addresses) here.
It was a particular interest to see the various composting systems that were being used by each garden. Many Master Composters team up with a local community garden to mentor and maintain the compost bins, so perhaps this will strike your interest and get you out to the community garden in your neighbourhood!

Peace Garden Park
The first garden we toured was in Oliver, called Peace Garden Park. It is a very new garden (opened July 2009) and so it does not have a compost bin set up yet. A community member designed this one for Peace Garden Park, which they plan on building this September: 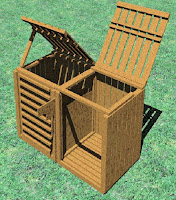 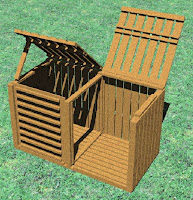 I'm not quite sure why there are two separate bins but presumably the bins would all line up and the two outer bins could be holding units, while the two inner bins have a mix of greens and browns. I guess we'll have to wait and see!

The Queen Community Garden, www.thequeen.shorturl.com/
After a short bike ride north, we arrived at the Queen Mary neighbourhood garden. Also a new garden, they have a rather small compost bin for the volume of organic waste that they probably make. They, too, are planning on building a larger bin system.

Boyle Street Community Garden
A few blocks east and we arrive at the huge garden beside the firehall on 103A Ave and 96 St. The Boyle Street garden is one of the oldest gardens in the city, starting up in 1984! Our tour host, Bill, mentioned that there has been a decline in composting enthusiasm at the garden and the bins have been inactive for this year. He said that they would be good to start a composting committee which would actively turn and water the compost material as required. 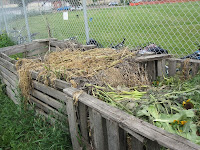 A tired bin system made of old pallets.

The Boyle Street garden is in its final year of harvest at this location. With a redevelopment plan known as the Boyle Renaissance, the city is going to build a new community hall and apartments on the land where the garden currently sits. The garden will be relocated one block north to land that is currently a gravel parking lot. I was pretty sad to hear this since the Boyle Street garden has worked for so many years to make the soil healthy and alive! I suppose they will need a lot of compost at their future site.

Our Urban Eden
We biked south from Boyle Street, down into Louise McKinney Park, and west to the bottom of Bellamy Hill Road. Our Urban Eden is another established community garden. Due to high pedestrian traffic and almost daily cases of illegal dumping, they decided to remove their compost bins. Too many improper materials were being put in the bins, despite very clear
signage and education efforts. Maybe they'll try again some day... 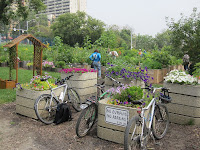 Strathcona Rail Community Garden
After crossing the High Level Bridge to the south side of the river, we followed Saskatchewan Drive east for a bit then dipped south to the the street car tracks on 105 St. The Strathcona Rail community garden officially started in 2009, but had been a garden site for some 7 or 8 private lease holders since the early 1980s. With lots of old wood lying around, the gardeners had supplies to build a few different compost bins. 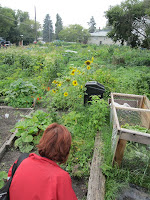 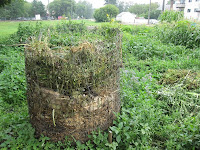 The site is very large and the gardeners seem keen to capture all the organic waste and put it to good use. They have a composting committee which seems to help them keep up with their composting duties.

U of A ECOS Community Garden,
www.su.ualberta.ca/services_and_businesses/services/ecos/projects
This garden is open to the community but organized by a summer staff of the Environmental Coordination Office of Students (ECOS). This garden has a mix of new and experienced gardeners and composters. In fall of 2008, they received materials from the Strathcona Home Depot to build a fine 4 bin composting system as well as a holding area for browns. 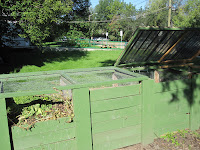 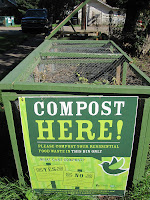 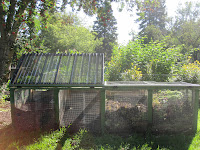 All bins are open to the public and garden encourages nearby residents to bring their organic waste to the community garden for composting. The signage has been essential for keeping unwanted materials out of the bins. They didn't report any problems with the compost bins so far, and they really like the browns storage bin! What a great idea. 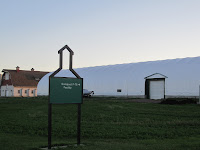 Our tour guide for the UFOG garden said that the composting facility always has a pile of compost waiting for residents and small businesses to come pick it up at no charge. Its the small black pile on the right. 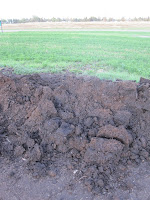 A closer look at the free compost.

Some ideas from the tour about how Master Composters could help a community garden:


For a list of active community gardens, visit the Edmonton and Area Community Gardens website. For more pictures of the garden bicycle tour, visit the photo album.
Email ThisBlogThis!Share to TwitterShare to FacebookShare to Pinterest
Labels compost