Walking in Someone Else's Shoes...

...and in their shirt, their belt, and their sweater.


In today’s fast fashion world, artificially inexpensive clothing is widely available thanks to a globalized apparel industry. However, consumers are growing increasingly concerned about the social and environmental effects of dubious labour practices and environmentally unsound synthetic materials. What we wear has been a hot topic in the news over the last couple of years. 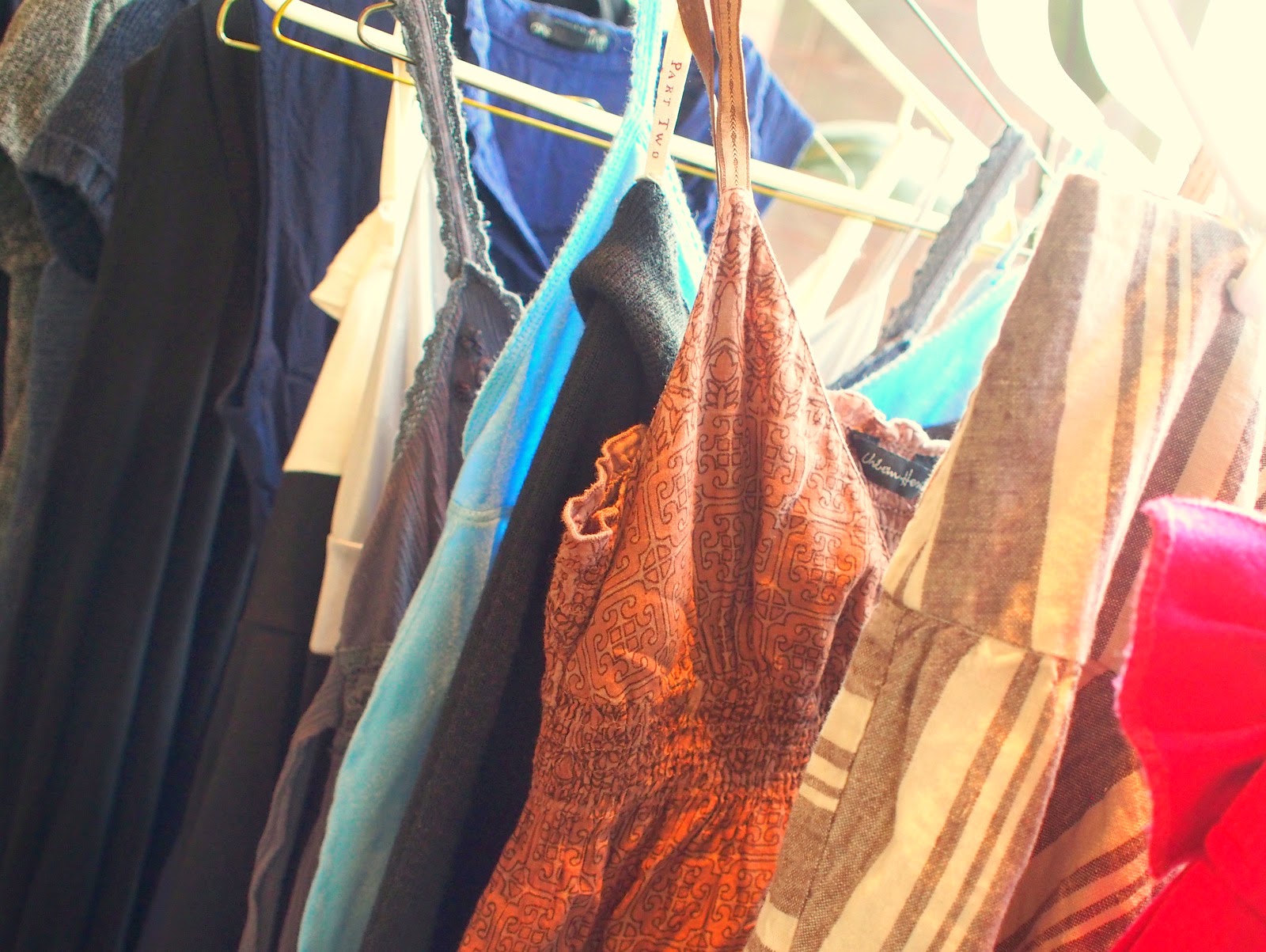 Low prices mean that individual clothing items no longer represent significant investments as they did in the past, so consumers are unlikely to put time and money toward mending these items when necessary. It seems easier to go out and purchase a brand new sweater than to replace one that lost a button and began unraveling at the seams. Low prices also enable consumers to purchase additional new items to supplement their existing wardrobes, which can result in a closet full of barely or rarely worn clothing.

On the evening of 25 June 2013, MCRs Robyn C, Heather S, and Andrea W hosted a clothing swap as part of a fashion industry event in Edmonton NextGen's DIYalogue series.

The MCRs had various reasons for organizing the event.

"There is so much waste in the clothing industry, and we just wanted to spread awareness of the social impacts as well as the environmental ones," said Robyn.

To Heather, hosting a clothing swap "seemed like an interesting and productive way to get our age group interested in reusing and recycling--to make people think about their everyday actions, what they spend their money on, and where their waste goes."

Though all three had previously participated in clothing swaps among friends, they wanted to do something bigger. At first, they had difficulty defining the scope of the event.

"We wanted this swap to be bigger, and more public," said Robyn, "but we couldn't predict how many people would show up, and we didn't know where to host it, how much to charge for admission, or whether we should charge any admission at all." 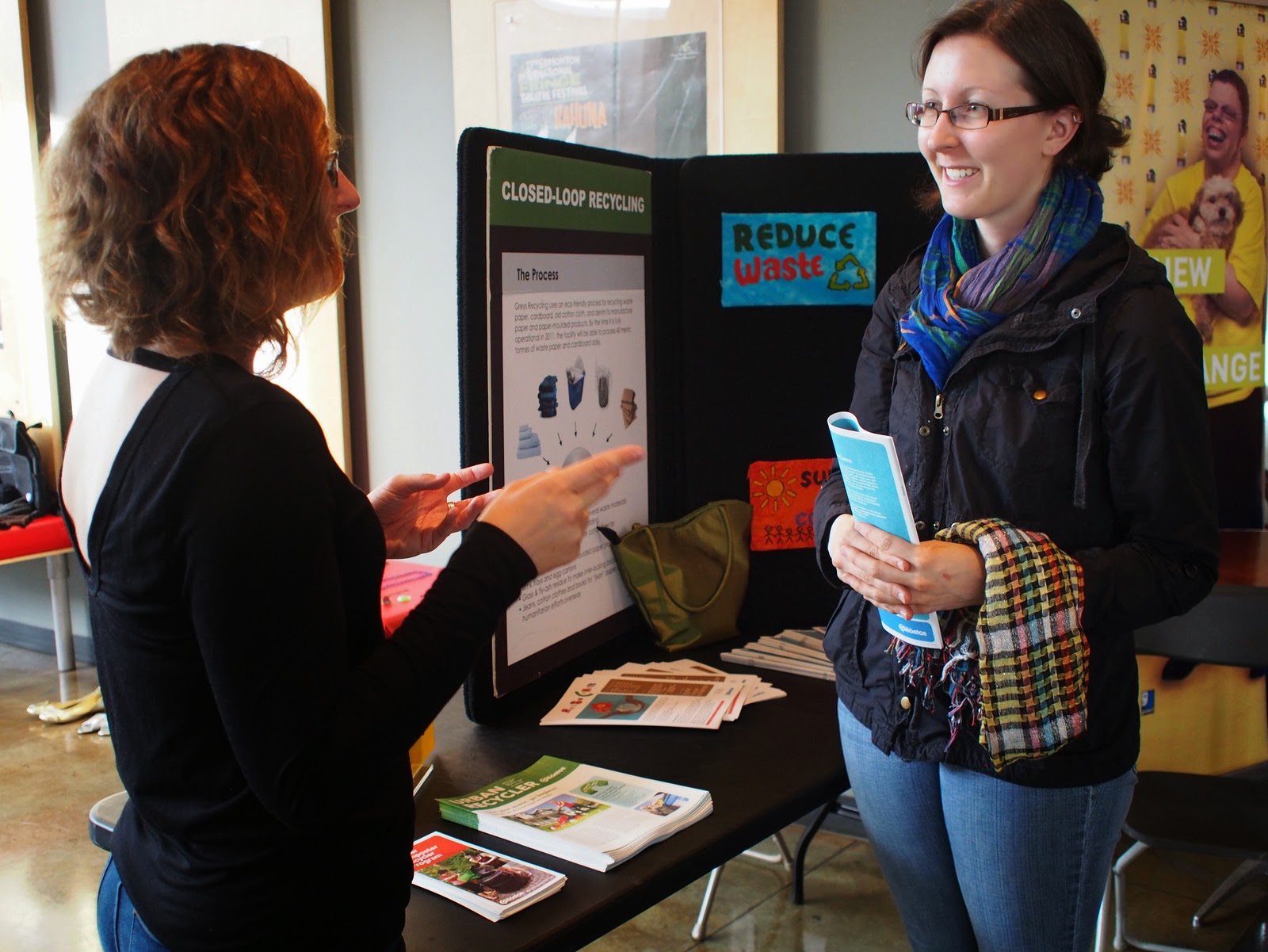 Fortunately, their participation in the MCR program had provided them with not only a wealth of knowledge on topics related to composting, recycling, and waste management, but also a network of supportive City of Edmonton staff and volunteers all enthusiastic about promoting "the three Rs".

Edmonton's NextGen approached the MCR clothing swap team through Laura, former MCR Program Assistant. Laura is an active volunteer with NextGen, an organization dedicated to bettering Edmonton for the enjoyment of future generations. NextGen was already in the process of organizing an event in their DIYalogue series on the topic of fashion. The fashion industry networking event was a great fit for the clothing swap.

"We tapped into a bigger network by joining forces [with NextGen]," said Robyn. "It was nice to know we were reaching out to more people, not just people we already knew."

Andrea added, "I think joining their event gave people more reasons to check out both elements of the evening's programme." 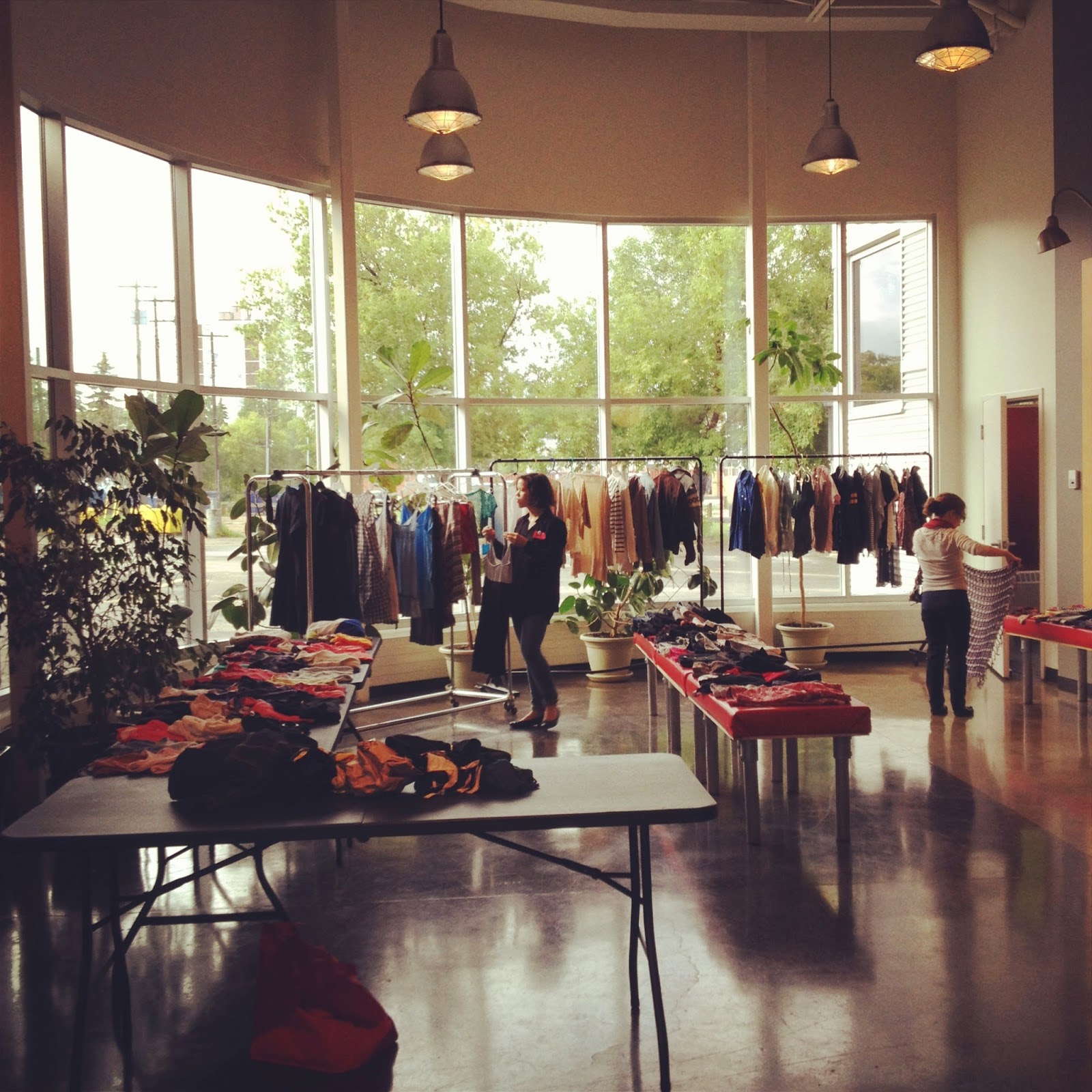 While partnering with NextGen relieved the MCRs of tasks related to booking a venue and organizing ticket sales, Robyn, Heather, and Andrea were still left with the biggest task: soliciting clothing donations. Though they put out numerous calls for donations to the MCR community prior to the event, they received no pre-swap donations beyond what they personally collected from friends and relatives. By the night of the event, they had managed to compile just enough stock to start them off for the evening.

"We were a little worried," admits Robyn, "but people really came through on the night of the swap." 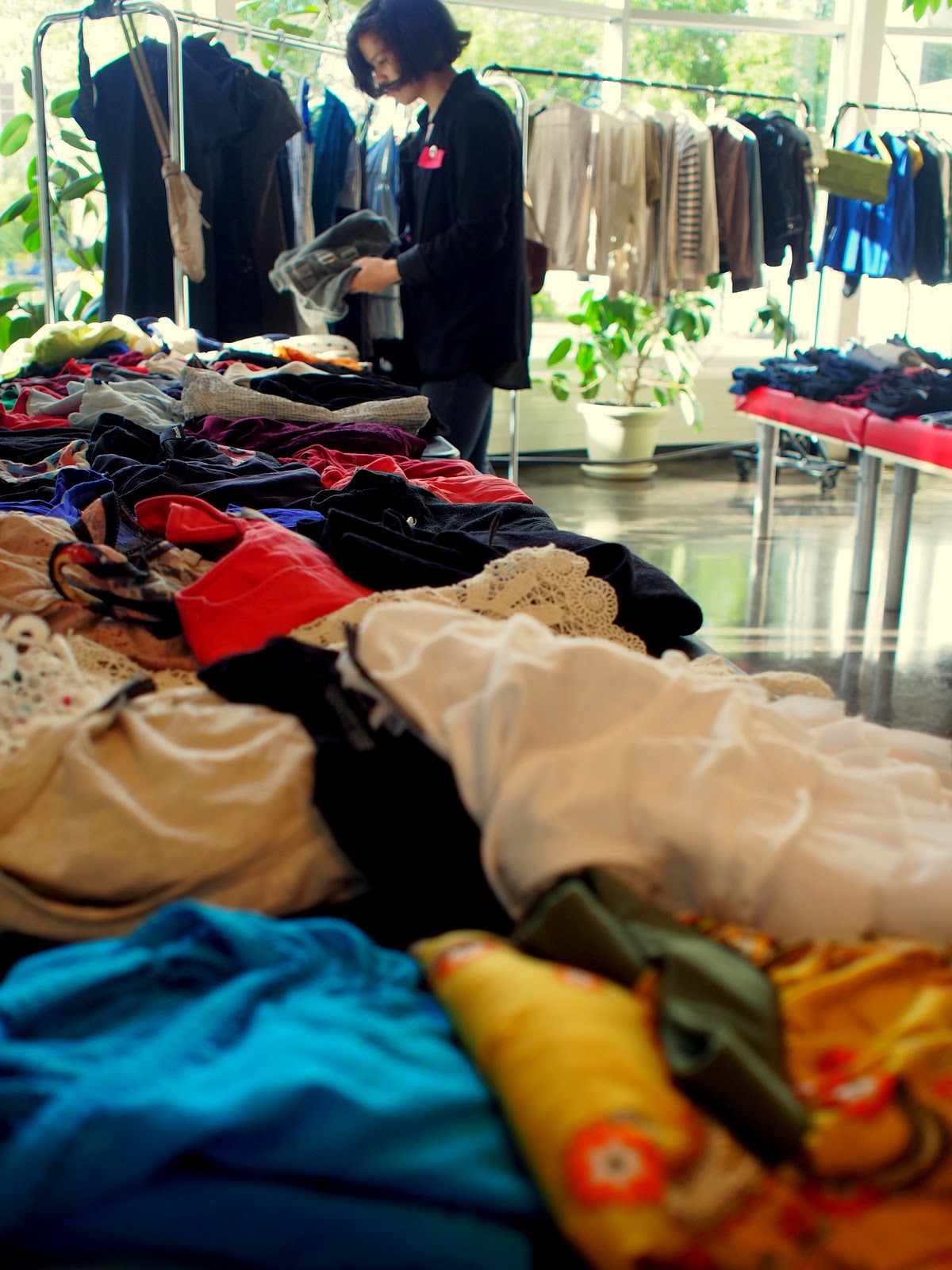 Donations rolled in steadily for the duration of the swap. "The quality of the donations was really high, and the volume was great," said Heather. "The display looked really good the whole night.The Arts Barns were a perfect venue, because the fashion industry networking/mentoring stuff was happening in the main space, and we were just off to the side with mirrors, racks, and tables all provided by the venue. The bathrooms have big full-length mirrors so people could try things on."

The swap facilitated many outreach opportunities. "People seemed really enthusiastic about donating and browsing, and we had some really unique opportunities to talk about wasting less," said Andrea. "It felt so different than chatting with people over a table at a fair, because people lingered longer."

The MCRs found another partner in Goodwill Industries, who added their perspective to discussions about the social impacts of waste and reuse. They also collected all unclaimed items from the clothing swap at the end of the event. 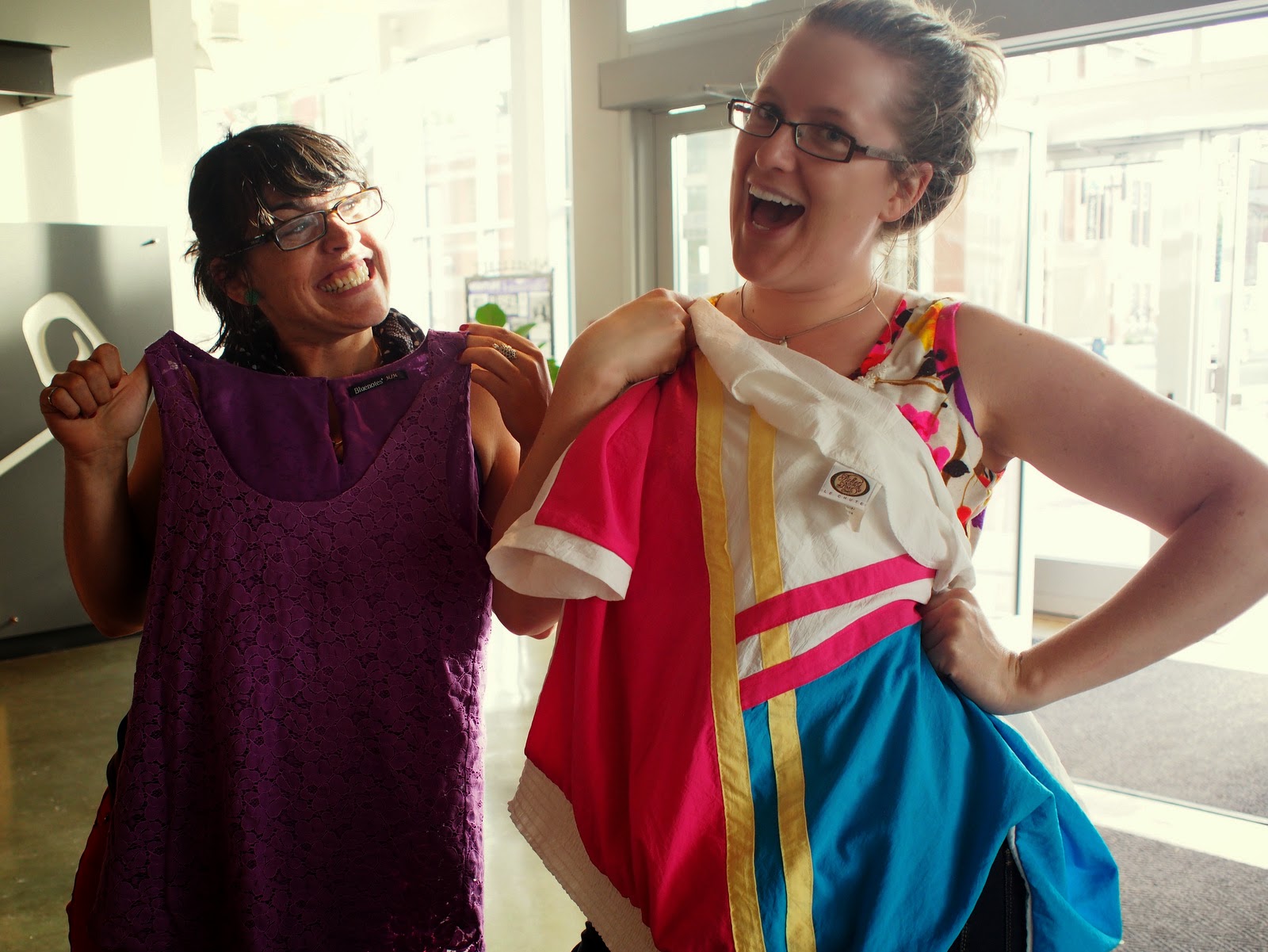 "It was so powerful to have the fashion creators together in the same room with people on the reuse and recycle end, and all of us being consumers," said Robyn.

The MCRs reached over 100 people at the event. Their donations to Goodwill extended that impact in a different way.

Top Tips for a Clothing Swap - from Robyn, Heather, and Andrea
1. Don't be afraid to organize something small and intimate among friends--it could be just as effective.
2. Work your own networks. Reach out and target groups of people you know using your interests.
3. Find a way to make it fun. A clothing swap is a great idea for party at this time of year, when everyone is "spring cleaning"!

Robyn C, Heather S, and Andrea W all graduated from the MCR program together in 2013. They've been involved in various projects together and separately, such as helping out at the Reuse Centre, doing presentations for school kids, and holding zero-waste dinner parties.
Email ThisBlogThis!Share to TwitterShare to FacebookShare to Pinterest
Labels fun, Master Composter Recycler (MCR), MCR blog post, reduce, reuse, waste reduction, Waste Services