A Compost Tribute to Service & Sacrifice 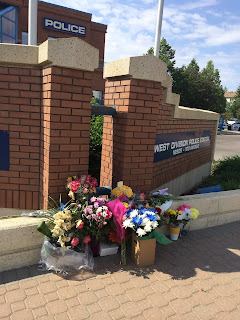 In June, 2015, Edmontonians laid hundreds of flowers at police stations and memorials in honour of Constable Daniel Woodall. Following the funeral services, the Edmonton Police Service (EPS) searched for a respectful way to deal with these tributes.

So began a unique project of service, sacrifice, and compost.

Lorraine Cramer, Public Affairs Supervisor for EPS, explains that "Edmontonians offered a visible show of support for the Woodall family, leaving flowers as a mark of respect at police stations across the city. We thought that composting them and using that compost would be a special way to acknowledge these offerings."

EPS staff collected the mass of flowers and delivered it to the Compost 'S cool - a compost education site at John Janzen Nature Centre. 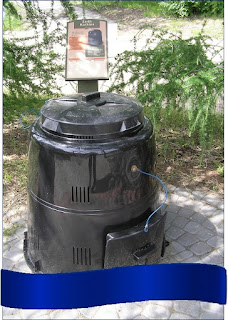 Sheridan Sigstad, Compost Educator for the City of Edmonton's Waste Management Services, helped mix the flowers with other organics in a designated compost bin and watered them. The bin was marked with a blue ribbon to fit with the Blue Ribbon Campaign.

"Throughout the summer, volunteers and visitors at Compost 'S cool saw our bin with the blue ribbon, and we explained its significance. Then we asked them to help by watering, fluffing, and contributing other greens. It was nice to see this process because hundreds of volunteers and visitors got to contribute to this memorial," said Sigstad. "I think they felt honoured to be part of this project."

The Edmonton Police Service intends to use the finished compost as part of memorial services in the future. 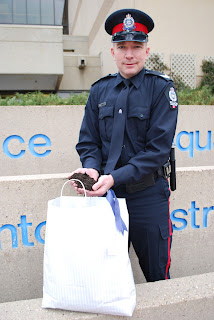 The bouquets were mostly stems and boughs. Extra materials was added to encourage quick decomposition over the summer.

Shredded leaves filled spaces and held moisture, while fresh greens like fruit peels and grass clippings fed the bacteria to get the process working.

Water helped the bacteria flourish, while fluffing added oxygen to keep the bin smelling like forest soil after rain.