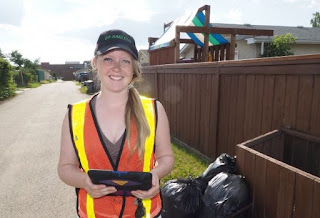 Talking to Laura Henderson and Myles Curry about their work for the City of Edmonton’s Waste Management Branch is a combination of fascination and pride – fascination at their brilliance, and their pride in their work.
The social marketing coordinators have one goal, and that’s to help residents take full advantage of programs provided by Waste Management Services. Working together with the people of Edmonton, they want to help achieve 90 per cent diversion of our residential waste stream.
And just one of the ways they do that starts out early weekday mornings in the city’s back alleys.

[Note: First published in September, 2015. The program wrapped up for the November/December season, just this week. It will start again in early January.]
With big smiles on their faces, they explain.
“Thirty per cent of our residential waste stream is generated by just 10 per cent of people, so our back alley social marketing plan starts by identifying who’s putting out unusually large amounts of garbage,” says Laura.
“We’ve established a benchmark of how many ‘garbage bag equivalents’ is a normal amount to set out. Then we send staff into back alleys on pickup days, in advance of the collection trucks.
“These staff use GIS-equipped computer tablets to record addresses where the norm is being exceeded, and that data flows right back to us.”
The next step, says Myles, comes later in the day, between 4 pm and 8 pm, when employees who have been specially trained to engage citizens in recycling-oriented conversations knock on the front doors at the identified addresses.
They understand that various situations can cause households to set out more than usual. Their first question is always “was today’s garbage bag count normal for you?” That enables them to tailor the conversation for householders whose large volume of waste was out of the ordinary, such as after hosting a big party, or cleaning out a basement.
“If the resident says it was a normal count, we carefully engage them in a conversation about recycling. Some people simply need a small nudge to get started,” says Myles.
“We once encountered a couple who’d lived in the city for 30 years; they were absolutely amazed, and thrilled, that there was a recycling program.”
“Some of the 10 per cent are newcomers either to the country or the city, and some of them just aren’t aware yet of what can be recycled, so they just don’t,” he says. Over 90 per cent of Edmontonians already participate in the City’s recycling programs.
GIS software in the field allows for a seamless transition between morning identification and evening canvassing. Canvass staff can easily access the location of the households, plan their routes between households, and record information about their conversations. This software is essential to tracking the program’s impact and building in continuous improvement.
To date, the program has run for five months and the team has had conversations with more than 2,500 households.
According to the team, the success rate at front doors is phenomenal. Most people are grateful for the gift of a few free blue bags and are eager to start recycling. Later follow-up alley counts show an increase in recycling at households who had conversations with the team.
The program is delivered during periods when yard waste is not a factor, between January and April and from Halloween to December to reach households who are more likely to set out large volumes year-round.
Laura and Myles say they are not aware of any other city that has combined the use of morning inspections, tablets with GIS software, and evening canvassing to change the waste behavior of residents.
But it’s a dead cinch that they’ll continue their research and their efforts to help the City reach that 90 per cent target.
Visit edmonton.ca/waste