The Ghosts of Xmas Past

A few years back I unwrapped a nice set of Martha Stewart plates and was impressed by both the style and also the large amount of styrofoam used in the packaging.

On the next business day, I sent an email to Martha saying I liked the plates but thought she could do better with the box, and suggested a switch to low-grade paper instead of foamed plastic.

She didn't respond, but then, she's a busy lady. 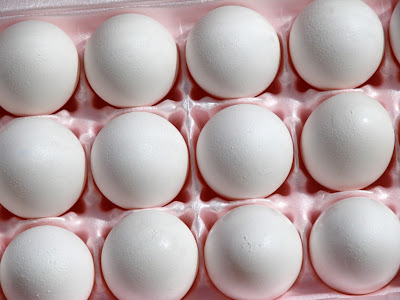 It only took one mention to the manager of my local corner store and the foamed plastic egg cartons were replace with paper the following week. It took a few mentions to my local grocery store, and now, Wow! -no foamed pastic egg trays. I feel I can take some of the credit for less styro waste going to landfill today.

Lately, I have heard from a few Master Recyclers about plastic recycling technology as mentioned in last week's Journal and in this youTube video. (thanks to Heather, Alex, and Cathie for passing them on)

So, here is my take on this new technology:

Plastics come in many forms. Also, plastics pre 1980s are a real hodge-podge of chemicals and processes. If someone were to recycle plastics in their home or office, many of the toxins trapped in the plastics would be released to the environment. Also, wherever that oil was then burned as a fuel source toxins would enter the environment. The controls on this system appear few.

Also, recycling on such a small scale does not recover nearly the energy represented by those plastics. An industrial scale recycler would be far more efficient, even taking transportation into account.

The City of Edmonton is moving in this direction, but will recycle ALL residuals into ethanol. However, we will recycle and reuse FIRST. (see this post for more)

I am excited by this new technology, because it represents the move to home-based recycling. By that I mean, in the 50s a computer filled 4 rooms, the 70s saw the move to home based computers, and today we carry 1000 times the power in our pocket - imagine the cool recycing toys of the future.

Until the technology is developed further, it is best to leave this type of thing to the engineers and always ensure responsible recycling that will not release toxic nanoparticles to the environment.

Now, I'm off to roast marshmallows over some burning, pressure-treated off-cuts.