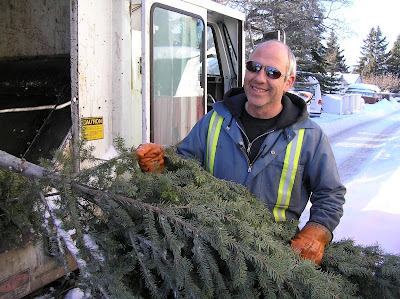 This year marked the twentieth year of city-wide natural tree collection, and the popular service shows no sign of slowing down.
Last January’s roundup was a textbook example in teamwork, according to Collections Foreman Doug Fischer. The 10 member crew collecting trees did an excellent job, with a little assistance from their colleagues.
“With the weather warming up, the trucks kept getting stuck in the alleys and back lanes,” he said. “Thankfully, the guys noton tree collection would go out of their way to help free their fellow workers.” 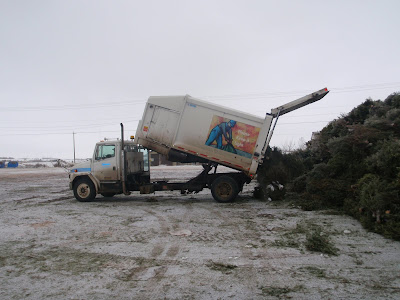 Nearly 15,000 trees will collected for recycling following the holiday season. 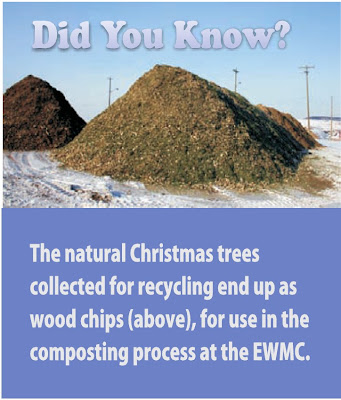 According to Jim Lapp, supervisor of compost operations at the Edmonton Waste Management Centre, getting rid of sewage waste is an ongoing challenge for cities everywhere.
“Edmonton’s approach has been to treat it as a resource material,” he says. “Once it’s safely processed, it can be used as fertilizer and in other applications.”
Jim points toward a huge pile of wood chips being scooped and turned by an enormous yellow front-end loader. “That's all the Christmas trees we picked up since the holidays,” he yells over the noisy diesel engine. “We mix it 50/50 with the biosolids to help with the composting process.” 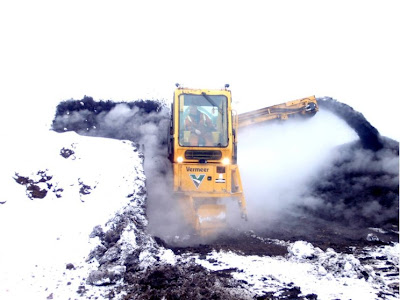 A new system known as mass bed composting is being used this winter. It involves piling up huge mounds of material that are left uncovered. This form of composting requires less space, and the size of the piles offers better moisture and heat retention, allowing the bacteria within the piles to decompose the material more efficiently.
“Once a month we use a machine called a mass bed turner to pick up the piles and move them 15 feet,” says Jim. “It aerates and fluffs the piles as it turns, allowing for more even decomposition.”

The compost is sold farmers, landscapers and land developers. It is also used by the City as soil erosion control and as top dressing for parks.
The 2011 tree collection begins January 10.
Email ThisBlogThis!Share to TwitterShare to FacebookShare to Pinterest
Labels compost